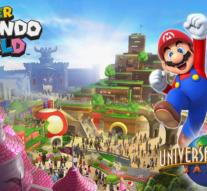 tokio - In Japan, the construction of an amusement park has been completely dedicated to Nintendo. Super Nintendo World must be ready in time for the 2020 Olympics in Tokyo.

The theme park is part of Universal Studios in Osaka City. The plant costs more than 60 billion yen, converted around half a billion euros. The park includes a Mario Kart attraction.