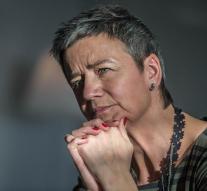 - The European Commission is concerned about the acquisition of chip manufacturer NXP by the American Qualcomm.

According to Brussels, the merger of companies could lead to an excessive concentration of licenses within the chip market. These concerns can make the biggest deal in the history of chipmakers difficult.

This is evidenced by a news service Policy and Regulatory Report specializing in competition law. The news service is based on three sources.

Qualcomm has until Thursday the 1st of June to take away the concerns of the Eurocommissioner Vestager (Competition).

According to the news service, the Americans have already tried in vain a number of times in order to show that there is enough competition after the acquisition. If this does not happen before midnight on Thursday, the European Commission will launch an in-depth investigation (Phase II).

One possible outcome is that there is no approval for the acquisition in this form.

The NXP spokesperson did not want to respond to the message in substance. 'We do not comment on this kind of speculation. '

In addition, he stated that NXP is being taken over and that any contact with the European Commission may take place via Qualcomm. The US company has not responded yet.

Last Wednesday, at least three shareholders knew they found the current price of $ 110 per share too low. They find that NXP must be back with Qualcomm.

One of the shareholders is the activist investor Elliott. Recently, Elliott tried to force AkzoNobel to accept a takeover bid from the American PPG.