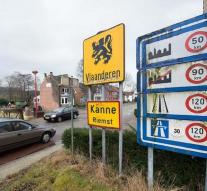 brussels - Austria, Germany, Denmark, Sweden and Norway may continue to monitor parts of their internal borders for a further six months, but they have to go down. That is what the European Commission presents to the Member States. It is the last time that extension is legally possible.

Instead, there must be 'proportionate police controls' and more police cooperation in border regions. In this way, threats according to the committee can be more effectively and more flexible, for example through joint threat assessments and patrols in international trains.

'By working together, it is possible to have both security and freedom of movement,' said Vice President Frans Timmermans. 'That means we'll be back in a fully functioning Schengen area within six months without internal border controls. '

The five countries received formal approval a year ago for the controls, which in principle are not allowed in the Schengen area. This happened because of the large numbers of migrants traveling through Greece to rich parts of Europe.

Because this risk still exists, Brussels considers extension 'out of precaution' justified. In the previous extension, a minority of especially Eastern European countries voted against.