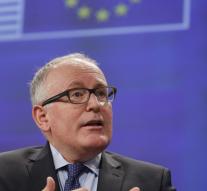 brussels - People who allow themselves to train later to commit a terrorist attack should be prosecuted. The European Commission wants this to be a criminal offense throughout the European Union.

The organization and funding of travel related to terrorism should be criminalized, said vice chairman Frans Timmermans Wednesday. That includes supplying weapons and providing transport or harbor terrorists.

Persons who travel to another country should be prosecuted to go fight there for a terrorist organization, said Timmermans. In addition, Brussels wants to give Member States more opportunities to act more forcefully against the dissemination of terrorist propaganda.

The aim of the proposals is the EU countries to give more elbow room to prevent terrorist attacks.