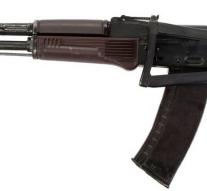 brussels - Europe must be much more difficult to purchase semi-automatic weapons. The European Commission proposed on Wednesday to consider include Uzis and Kalashnikovs as military weapons with which its trade across Europe for individuals would be illegal. Also legal weapons must be traced quickly.

In the attacks in Paris, but also used in previous terrorist attacks, semi-automatic weapons. Now such weapons in some EU Member States still available.

Furthermore, it should be much easier to ancient weapons made ​​again making use inoperative. The illegal importation of arms from the Balkans, for example, should be halted also by better controls

EU Commissioner Dimitris Avramopoulos (Asylum) hopes that the proposals become law this year. " There is no time to lose. "