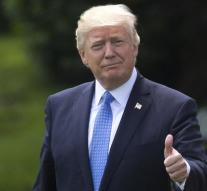 brussels - In Brussels it is all the goats to cover the two-day visit of Donald Trump, who has been looking forward to excitement for months. More than 4000 police officers must ensure safety and activists in charge.

The American president arrives on Wednesday afternoon with the Air Force One and is then received by the Belgian king Filip and Prime Minister Charles Michel in the royal palace. Thursday is scheduled for maintenance with EU leaders.

Then Trump moves to NATO to commemorate and share the new building of the Alliance with the leaders of the other NATO countries.

Higher defense spending and more action against terrorism is the message Trump has for his colleagues. They are expected to draw up a plan this year which shows that they are working towards a forer military budget. The Netherlands supports this, but because there is no new cabinet, Prime Minister Mark Rutte can not afford any concrete amounts yet.

Several Member States have already announced the fight against terrorism. Thus, the Netherlands is again launching a tanker aircraft for the coalition against terrorist group IS.

Trump, in turn, expects his support for the transatlantic band. He has claimed that the alliance has become obsolete has recently been swallowed. The hope is that he personally confirms that the US promises military support in an attack on a NATO country, as set out in Article 5 of the NATO Treaty.

Trump will reveal the '9/11 and Article 5 Memorial', incorporating a piece of the World Trade Center in New York that terrorists dropped on September 11, 2001. After that attack, the US triggered Article 5, the only time in history. German Chancellor Angela Merkel reveals a monument with a part of the Berlin Wall.

Belgium then carries out the new NATO housing- costing 1.1 billion euros- ceremonially to the treaty organization, after which some fighters fly over. During dinner, the relationship with Russia and the situation in Ukraine are also expected.

Belgium and EU leaders also hope that Trump shifts his statements. He named Brussels after the last year's attacks a 'hell hole'. 'In addition, he was excited about the UK decision to leave the EU. Last month, the foolish president once again praised the unity within the EU.