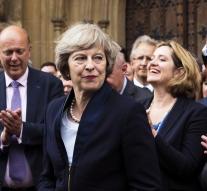 brussels - Brussels hopes that the new British prime minister from Wednesday, Theresa May, speeds up the invocation of the so-called Article 50 for the British withdrawal from the EU.,, We continue to call for clarification of the position of the United Kingdom, 'said EU Commissioner Pierre Moscovici (Economic Affairs) after the Eurogroup on Monday evening in Brussels.,, It is a condition for starting negotiations. '

According to Jeroen Dijsselbloem,, there remains a high degree of uncertainty 'by the outcome of the British referendum last month, in which the British chose a brexit.,, But we do not change our policy.'

The other EU countries are keen that London Brussels informs as soon as possible on the proposed withdrawal. Departing Prime Minister David Cameron has left this task to his successor but a new party leader and prime minister was only provided in the autumn.


The Eurogroup, the finance ministers of the eurozone, were met for the first since the British referendum.