Home / World / Brussels urged to hurry in case US data 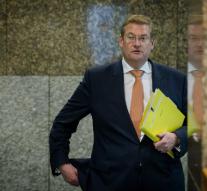 luxembourg - The European Commission must quickly come up with an answer to the judgment of the European Court of Justice that personal data of European Internet users can not simply be transferred to the United States. That signal gave several European Ministers of Justice in Luxembourg Friday . Minister of Security and Justice Ard van der Steur thinks that is urgently needed.

The judges Tuesday put a line through a fifteen year old decision of the European Commission, with which the United States was regarded as a 'safe haven' for private data. This is a sweeping statement, but not everyone knows exactly how far-reaching the consequences are Van der Steur. The minister himself is also working to see what the verdict means for the Netherlands. It is clear that the committee now has the move and need a solution.

It is also for business quite dramatically if you no longer are able to exchange information, while this is very much needed. Vice Chairman of the commission Frans Timmermans said after the verdict to come quickly with guidelines for national supervisors as The Dutch Data Protection Authority, so they know where they stand. Citizens expect safeguards and businesses need legal certainty. It remains Timmermans also possible that transatlantic data maintained based on other legal grounds.