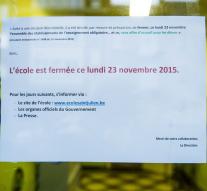 brussels - Public life in Brussels on Monday virtually ground to a halt. Subways not drive, schools, universities and kindergartens are closed and many shops, cafes and restaurants keep the doors closed, due to the highest threat level.

Only one traveler ventures into the train stations. The trains, but significantly fewer people use them. Large companies, including large banking groups such as Electrabel and KBC have called on their staff not to come to Brussels but to work at home.

The two branches of Ikea in Anderlecht and Zaventem, near Brussels, are closed.

Not everything is closed. The big supermarket chains Delhaize and Carrefour keep their establishments open four stores after which lie in the center of Brussels. The Atomium, one of the main tourist attractions of the city, will be basically to visit.