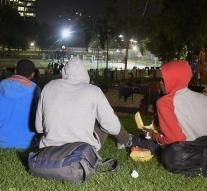 brussels - The police in Brussels have arrested about 100 migrants this week. On Friday, thirty were taken in an action at the Maximilian Park, which is estimated to be more than five hundred, especially from Africa. They do not usually ask for asylum, and hope to reach Britain.

At the nearby North Station, tens of thousands of migrants were already detained. The Immigration Service has been detained, State Secretary Theo Francken (Migration and Asylum) said.

The government had announced this week to address the situation in and around the park. The labor inspectorate has also been put in place to prevent rioters from putting the migrants at work for little money.

Some of the migrants come from Sudan. According to Francken, that country is willing to deliver travel documents and to take them back.