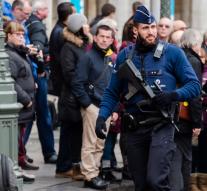 brussels - The terrorist cell which was raided in the night of Monday to Tuesday in Belgium, was created in Brussels motorcycle club Kamikaze Riders'. Belgian media reports said Wednesday.

The two suspects were arrested, according to the Belgian newspapers Mediahuis Said Mohamed S. and K. They were already on November 25 in the clubhouse of the motorcycle have devised their plans. According to the federal prosecutor wanted to commit attacks in different symbolic places in Brussels during the New Year celebrations. The arrests are independent of the attacks in Paris.

The arrests took place in house searches, the Brussels region, the Liège region and the Flemish Brabant region. A total of six people were arrested. Four have been released.

'Kamikaze Riders' has direct links with the furled Sharia4Belgium.