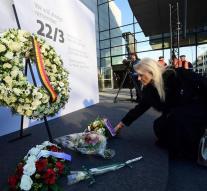 zaventem - With a minute of silence at the Belgian national airport Wednesday morning began the commemoration of the attacks in Brussels a year ago. This happened at 7:58 am, the time when two suicide bombers on Tuesday, March 22, 2016 blew up in the departure hall.

In the presence of relatives and loved ones at home and abroad, King Philippe and Queen Mathilde, Prime Minister Charles Michel and members of the Belgian government, the names were read of the sixteen men and women who perished. After the minute of silence followed some testimony on that black day, which was blacker than an hour later, a second attack in Maelbeek Metro Station, at 9. 11am. Also, there is Wednesday held a minute of silence for the death penalty that fell with it.

The royal couple laid a wreath at a memorial plaque in the departure hall. Then it went by subway to Maalbeek.