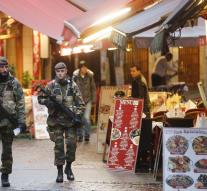 brussels - In Brussels scrambles public life again slowly. Despite the still prevailing highest threat level Tuesday opened more stores, museums and attractions, such as the Atomium, the doors. It seems almost like normal again, but the streets in the center of the Belgian capital and at key locations in the coming days will be dominated by soldiers and agents.

Brussels Brussels is not since Saturday. When public life came at the behest of the authorities for fear of attacks to a near standstill. The Belgian authorities hunt with might and main on Salah Abdeslam, a suspected perpetrator of the attacks in Paris, and his possible accomplices. Four people have been officially charged and firmly put on suspicion of terrorism, but Abdeslam is still on the run.

In recent days, journalists and ventured only a handful of tourists in the city center. Cinemas locks, concerts were canceled and museums were closed. Many of the companies based in Brussels showed their personnel working at home.

In other areas of the city to try the locals just go on with their lives. On a large square in the town of Saint-Gilles, just outside the center of Brussels, move people, despite the rain, on the terraces and plays a tape.

While the threat of a (terrorist) attacks still " serious and very near " and the threat level from four valid until next Monday, the government decided to reopen schools Wednesday. Hundreds of agents are responsible for the safety of the children, students and teachers. In the metro, which from Wednesday start driving again, agents will guard the place.

Many other companies want to return again Wednesday to "normal." Many have however indicated that additional security measures have been taken, such as inspection of bags and more guarding the door.