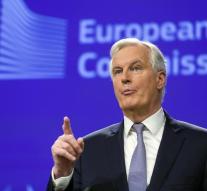 brussels - The British have to get along with the formal request for stopping the EU membership. The United Kingdom has in fact only eighteen months of the negotiations on the 'Brexit. By October 2018, there must be a deal.

That said the chief negotiator on behalf of the European Commission, the Frenchman Michel Barnier on Tuesday in Brussels. He wants the agreement to be ratified by March 2019, before the five-yearly European elections. British Prime Minister Theresa May said in the next spring it will invoke the so-called Article 50 that the withdrawal negotiations are started.

Barnier warned that the EU does not come to negotiate access to the single market without the free movement of persons. He also pointed out that the other 27 Member States 'will retain the unit. '