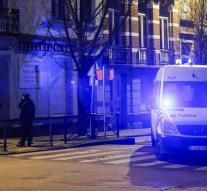 brussels - The man was arrested Wednesday during a search in Brussels, is suspected of involvement in the terrorist attacks in Paris. It concerns the Belgian Ayoub B., born in 1993. He is the tenth suspect has been arrested.


The Public Prosecutor in Brussels, it announced Thursday. The man is stuck,, for terrorist murder and participation in the activities of a terrorist group ''. During the raid, ten mobile phones confiscated. there were no weapons found explosives, according to justice.
The search took place in the Delaunoystraat near Sint-Jans-Molenbeek. Since the fugitive Salah Abdeslam would slipped away three days after the attacks.
NEW