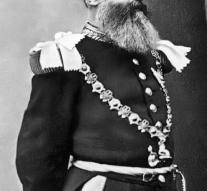 brussels - The tribute was held Thursday at the Throne Square in the Belgian capital.

Some organizations oppose the commemoration because they associate with Leopold 's reign of terror in Congo when it was still a Belgian colony. To get issues out of the way, the initiator, concluded the Brussels ships of Urban Planning and Heritage Geoffroy Coomans Brachène the deletion of the commemoration. " However, we wanted to be especially important architectural impact on our country emphasize ", he said upon.