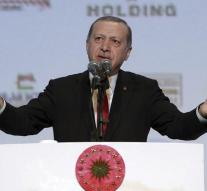 brussels - In many areas Turkey has removed recently from Europe. For a possible EU membership is also 'significant progress' required under Turkish law and the rule of law.

That suggested the European Commission Wednesday in a progress report on accession negotiations with Turkey.

The 'serious decline', especially after the foiled coup in July occurred in the area of ​​the independence of the judiciary, freedom of expression and other fundamental freedoms. There are also reports of enstige human rights violations, including torture of prisoners, said EU Commissioner Johannes Hahn (Extension).

The measures taken by the Turkish government, such as the arrest of parliamentarians, military, academics and journalists and dismissal of judges, are cause for great concern. Combined with the possible reintroduction of the death penalty, this is increasingly incompatible with Turkey's official desire to become members of the EU, the Austrian warned. In the field of law no compromises, he said. 'It is time for Ankara tells us what it wants now. '

Despite these concerns Turkey continues to play an important role in the refugee crisis, Hahn referred to the EU-Turkey deal of march. He reiterated that the abolition of visa requirements for Turks only be considered if it meets all the conditions. Now Turkey still refuses to include to adjust its anti-terror legislation, seems not feasible.