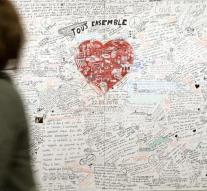 brussels - In Brussels Wednesday commemorated the victims of the attacks exactly one year ago. Not only at the official commemoration ceremonies, but also stopped on public transport, schools and many other places in the events of 22 March 2016. In addition to the three suicide bombers were also 32 civilians. There were more than 300 injured.

Survivors, survivors and dignitaries, including taking the Belgian royal couple to 07. 58 hours, the time of the attack, a minute's silence at the national airport in Zaventem. After laying a wreath and the inauguration of a monument they go to Maelbeek Metro Station, where 11 to 09. Again following a minute's silence.

Buses, trams and metros in Brussels than stand still. The drivers honk one minute as a signal against hatred and terror. Passengers are asked to participate to this by applauding.

At the conclusion of the official commemoration reveals the royal couple near the metro station a work of art in memory of the victims.