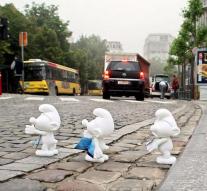 brussels - Brussels puts in the smurfs to boost the image of the city. The large-scale comic characters will act in many European cities as ambassadors of the Belgian capital.

The tourism and hospitality industry in Brussels has not yet exceeded the blow to the attacks last March. Reason for the Brussels government in the next six months to campaign in countries such as France, the Netherlands, England, Spain, Germany and Italy, but also in Flanders and Wallonia.

The slogan of the 4 million euro-winning campaign is 'Where will Brussels take you?' Well-known Brussels people as former cyclist Eddy Merckx and former footballer Paul Van Himst work on it.

Previously, the slogan 'Sprout to be Brussels' had to revive the animo for the city. Under the motto 'Eigenzinnig fenomenaal', Belgium recently launched a campaign with 99 reasons to visit the country.