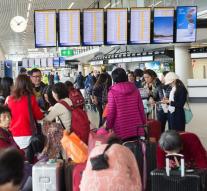 brussels - Travellers flying from Brussels to a destination within the EU, be assured that they get their aircraft as they arrive five minutes before departure at the airport.

they miss their flight nevertheless, they get refunded the price of the ticket. Which announced the head of the airport in Zaventem, Arnaud Feist, Thursday on the French radio station Bel RTL.

The check-in at Brussels Airport have been tightened since the terrorist attacks on March 22, but according to Feist is now working more efficiently than before. Travelers should still outside by an additional check in tents before they can enter the departure hall. Feist said that these so-called precontroles probably disappear by December, to make room for other measures ' '.