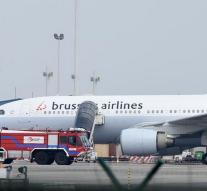 brussels - Airline Brussels Airlines carries at least until Sunday as many European flights from the airports of Antwerp and Liege. That has provided a company spokesman said Thursday morning.

The Belgian national airline puts buses between Brussels and the two regional airports. She calls the passengers as much as possible to use, because they have little parking airports in Antwerp and Liege.