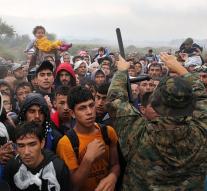 brussels - The European Commission allocates € 43 million in additional emergency aid for Syrian refugees in Lebanon. That made Commissioner Christos Stylianides (Humanitarian Aid & amp; Crisis) on Monday during a visit to the country.

Lebanon is home to more than 1.1 million Syrian refugees, equivalent to a quarter of the population. Last weekend visited Stylianides Jordan though. There he made a promise to 28 million euros in humanitarian aid.

The money is part of the 200 million additional emergency relief commission paved five weeks ago and is mainly used for shelter, heating, clean water, education and health. The UN agencies for food (WFP) and Refugees (UNHCR) may spend it.