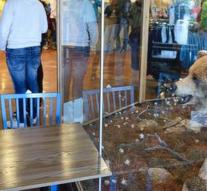 stockholm - A brown bear killed a nineteen-year-old boy in a zoo in Sweden. That happened during a tour of public in Orsa park, the police reported in the Dalarna province on Friday.

Together with a family, the caregiver had gone to a locked room where the bear could not normally come. Yet suddenly he was attacked and killed by the animal. The family could flee.

How the bear could get in the locked room is not clear and is being investigated. The animal was finished and the zoo closed. The park also houses tigers, leopards, lynxes and wolves besides bears.