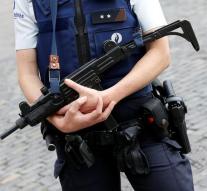 - In an anti-terrorist operation in the Belgian Wallonia, the police arrested the night of Friday to Saturday two suspects. Reported that the French-speaking broadcaster RTBF. Police raided a dozen locations in the region around Mons and Liège. Two suspects were detained for questioning.

The arrested men are brothers. They are suspected of having planned an attack on Belgian soil. During Saturday an investigating magistrate will decide whether they remain attached or not.

The operation has no connection with the attacks in Paris or Brussels, or the several recent terrorist attacks in France, according to RTBF.