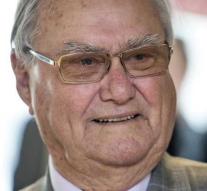 - Queen Margrethe visited her seriously ill husband Prince Henrik (83) on Friday afternoon at the State Hospital in Copenhagen. This was reported by Ekstra Bladet, who has a reporter at the Rigshospital.

It is Henrik's brother Étienne de Monpezat who tells Ekstra Bladet how the prince really works and that does not turn out well: 'It's only a matter of at most a few weeks, my brother is seriously ill. 'Perhaps that is why it is a coming and going Friday at the hospital, where Henrik was admitted on 28 January.

Apart from Queen Margrethe, crown princess Mary came by in the evening, with her two eldest children Prince Christian and Princess Isabella, followed shortly after by Prince Joachim with his eldest sons Felix and Nikolai. Joachim's ex, Countess Alexandra, issued a statement expressing her admiration and appreciation for her former father-in-law Prince Henrik.

In the meantime Crown Prince Frederik is on his way home from his stay in South Korea, where he attended the IOC Congress and part of the Winter Olympics. Significantly, it is only the second time that Frederik breaks off a foreign trip. The first time was in 2000, during the Games in Sydney, when he returned because his grandmother Queen Ingrid was seriously ill. She died more than a month after his homecoming. The Danish media therefore label the situation as 'particularly serious'.

Henrik, who has been diagnosed with dementia last year, has a lung infection and recently operated on his lung where a benign tumor was found. Earlier in the day, the Danish court announced that the state of health of Henrik had deteriorated.