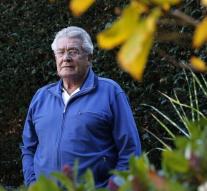 arnhem - Peter Wiegmink, the eldest brother of the murdered Posbank painter Alex Wiegmink not want more contact with the cold case of the police team.

'I'm disappointed because we as survivors barely get answers to our questions,' said the 74-year-old Wiegmink always stayed draw attention to the atrocities committed murder in 2003. gave Frank S., one of the suspected killers himself Wednesday from remorse himself to the police after a witness call Investigation Requested. A second suspect was arrested at the direction of S..

Wiegmink: 'A day later we had an interview with the cold case team. The team leader and his assistant talked for nearly an hour without anything meaningful to say about the circumstances. I had to hear yesterday from The Associated Press how it is treated and feel like a small, under-age boy. 'Wiegmink is very happy that the two suspects were traced. 'But I wonder why the police witnesses did not call earlier. That could for example have been when former cold case investigators in 2011, De Telegraaf all came to the conclusion that the perpetrators had come from near Erp. '