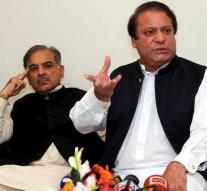 islamabad - The deputized Pakistani Prime Minister Nawaz Sharif has proposed his brother Shahbaz as successor to the general elections in 2018. He said in a speech for party fellow Shahid Abassi to be in the middle of the break. The 58-year-old Abbasi is a loyal ally of Sharif and is currently the Minister of Oil and Gas.

Shahbaz Sharif, 65, the prime minister of the big province of Punjab, where more than half of Pakistan's 190 million people live, must first acquire a seat in parliament before becoming leader of the country.

Nawaz Sharif's dismissal on Friday plunges into political unrest after several years of relative rest. The Supreme Court deprived him of his office, after allegations of corruption and money laundering. 67-year-old Nawaz Sharif has denied having done something wrong and warned that his deposition would destabilize the country. He calls the case a conspiracy against him.