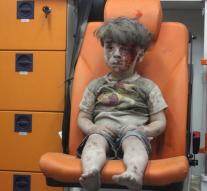 aleppo - The older brother of Syrian boy whose picture last week people around the world shocked, is deceased. He was injured in the same bombardment.

The 10-year-old Ali Daqneesh was internal bleeding and damage to his organs when the air raid Wednesday. He died later in hospital Reuters reports according to the Syrian Observatory for Human Rights, based in Britain and a witness on the spot.

The five-year Omran Daqneesh became the face of the enormous suffering in the violence-plagued city of Aleppo. On the video you can see how he looks dazed by the dust and the blood and reports to him as he sits in an ambulance. He has since been released from hospital.