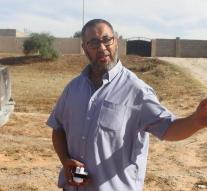 tripoli - The brother of suicide terrorist Salman Abedi, who was arrested in Libya, was aware of the plan to commit an assault. That said a spokesman for the local anti-terrorist unit that Hashem Abedi has in custody.

The unity arrested Hashem, Salman's younger brother, on Tuesday evening in Tripoli. 'We have evidence that he and his brother were involved in Islamic state,' said a spokesman. 'We've been following him for over a month and a half. He had contact with his brother and knew about the attack. ''

Hashem would travel from London to Tripoli last month. The anti-terrorist unit, also known as Rada, arrested Wednesday also the father of the brothers. This Ramadan Abedi was arrested in Tripoli during an interview with Reuters.