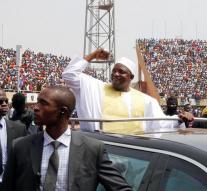 banjul - The new Gambian President Adama Barrow has the broom down by the army leadership. He dismissed according to chief officers Ousman Badjie and ten other senior officers. The head of the prison system was put out of his office.

The army and the prison system were regarded as pillars of the regime of Yahya Jammeh. He lost the elections late last year, but refused to give way to Barrow. Only after neighbors threatened to remove him by force, the long-serving leader chose eggs for money.

According to an army spokesman were rehired about 20 army officers since the arrival of Barrow. These include military personnel had to leave earlier because of their alleged involvement in a failed coup against Jammeh in 2014.