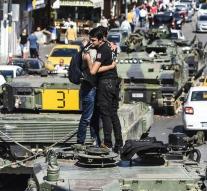 - The actions of the Erdogan-gezine forces against the coup plotters, according to Turkish government circles largely completed. Sporadically, there is resistance, which according to the head of the secret service MIT, Hakan Fidan, will be broken in the coming hours.

Erdogan seems, however, not yet assured because he has the Turks called again to take to the streets. The chaos in Turkey is a half day after the coup attempt by a section of the army still complete. The death toll (265) is still going on and the casualties are many coup leaders and citizens. Certainly 1200 people were injured.

Nearly 3,000 renegade soldiers are arrested and put through the security forces of President Erdogan, trying to quell the violence. The government Recep Tayyip Erdogan has returned control of the country. Last night Prime Minister Binali Yildirim claimed the Turkish all that the coup was beaten down.


Civilians shortly after the coup by Erdogan urged to take to the streets. Ankara became the Parliament building badly damaged. Coup Perpetrators were harassed, but also nonviolent transported elsewhere by troops loyal to Erdogan. Ankara gave their coup attempt, and took off their uniforms.

About the instigators of the coup attempt must appear later. Erdogan already pointed the finger at the United States for the exiled Muslim cleric Fethullah Gulen.

Turkey represents turbulent weeks. So Erdogan will have to decide what happens to the arrested soldiers. The Turkish president already announced to take tough measures.