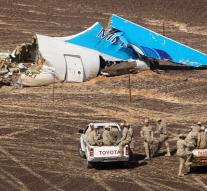 london - The British decision traffic to and from the Egyptian resort of Sharm al- Sheikh to stop was prompted by intercepted conversations of extremists. They would, according to the Daily Telegraph in the days before the crash of the Airbus A320 Russia have discussed plans for a major attack in the region.

Russia and Egypt complained earlier that the British were premature in their suspicion that the device is crashed by a bomb. The British minister Philip Hammond (Foreign Affairs), the newspaper stated not to share any information that his government has with any other country. " Some information may we share, other ", said the minister.

British intelligence information would otherwise have only discovered after the plane crash in which 224 people were killed. Jihadists in Sinai have previously claimed an attack.