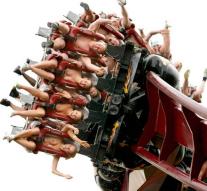 london - More than 120 people go Sunday in Britain expected to undress for a remarkable record. They try the BBC to break a world record by naked to get into a rollercoaster.

The record attempt at Adventure Island in Essex is meant to raise funds for a hospital. The theme in 2010 was already the scene of a similar stunt. When 102 people broke the world record by making a nude ride in the Green Scream attraction. Never before were so many people exposed in a roller coaster.

The previous record yield 20,000 pounds ; almost 28 000 at the current exchange rates. The organization hopes that the action of Sunday was successful.

Guinness World Records has confirmed that the attempt is logged. A spokesman for the British wished already favorable weather conditions allow.