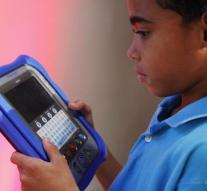 - A 21 year old man from the UK Bracknell has been arrested in connection with hacking at toy manufacturer VTech. When the hack November 24 came to light, data from more than 4.8 million adults and 6.4 million children stolen.

The man was arrested this morning on suspicion of unauthorized access to a computer which was made possible by committing a criminal offense. That the South East Regional Organised Crime Unit (SEROCU) announced in a statement. The investigation department has also seized a number of electronic items.