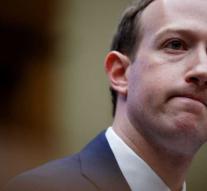 london - The British parliament still wants Facebook boss Mark Zuckerberg to testify. The members of the parliamentary committee for digital affairs, culture, media and sports write this in a letter to Zuckerberg on Tuesday. If the CEO of the social media company does not want that, then the MPs will have him summoned so that he will have to appear before Parliament the next time he sets foot on British soil.

Facebook recently sent technology director Mike Schroepfer to the British Parliament. According to the members of the House of Commons, however, it did not answer dozens of questions. Because Zuckerberg is also going to testify before the European Parliament, the British MPs call him on that European trip and travel to London on 24 May.

The British parliament is worried about the leakage of user data from Facebook to Cambridge Analytica. Zuckerberg also testified before the American Congress because of that scandal.