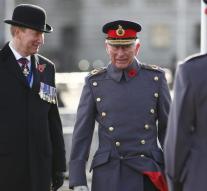 - The British royal family has a moral obligation to come to the aid a Bahraini activist, says Human Rights Watch (HRW). Ebrahim Sharif is accused of 'inciting hatred against the government' because he was critical of a visit by Prince Charles last week led to the Gulf state. He faces a prison sentence of three years.

The man was already imprisoned between 2011 and 2015, because he had called for more democracy and the abolition of the monarchy. The visit of the Prince of Wales, he had depicted in Bahrain as 'laundering' the human rights situation in the country. Two days after the publication of an article in which he made critical statements, Sharif was interrogated by the police. Then he could go, but he's still suspicious.

'The pageantry of a royal visit should not be followed by the arrests of peaceful critics,' says HRW. Meanwhile, let the British Foreign Office know the 'concerned about the issue' to raise with the authorities in Bahrain. The human rights organization is too thin and it wants the royal ruling.