Home / World / British pound in red after the Brexit delay 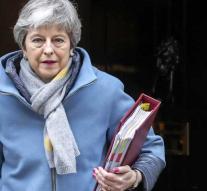 amsterdam - The harsh statements by PVV leader Geert Wilders and FVD leader Thierry Baudet about the bloody attack in Utrecht are, according to Prime Minister and VVD leader Mark Rutte 'not acceptable.' Rutte said that...

After rumors in the morning, it was finally announced this afternoon that the British no longer wanted to leave the European Union on March 29, but three months later. The remaining EU countries still have to agree to that delay.

The postponement seems, among other things, to mean that the United Kingdom is still taking part in the elections to the European Parliament in May. Opposition leader Jeremy Corbyn, of the Labor party, demanded a new referendum on the Brexit at the British lower house this afternoon.