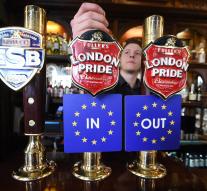 - "The British seem their concerns about an upcoming Brexit drink away from the European Union. In the past four weeks increased alcohol sales by 8.5% compared with the previous month."

"This increase reports the Financial Times on Tuesday. Not only the traditional type of beer sales, but also spending on Proseco to champagne rose."