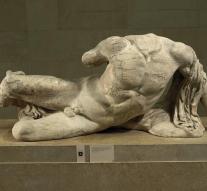 london - A group of British House of Commons Members attempts the Elgin Marbles, a collection of marble sculptures from the Parthenon in Athens, giving back to Greece. They have a proposal to that effect in the making and will soon submit it to parliament, according to British media Tuesday.

The sculptures, about half of what was in the Parthenon, were more than two hundred years ago in England brought by Lord Elgin. Because of money problems, he sold the works in 1816 to the British government, which she has since exhibiting at the British Museum. The House of Commons Members of various parties, seize the anniversary of two centuries to submit their proposal.

Greece tries the Elgin Marbles already recover in vain for decades. The Greeks want to show the world famous pieces in the Acropolis Museum in Athens, where now stand the rest of the marble friezes and other image structures. Many see the action of Lord Elgin then as art theft.