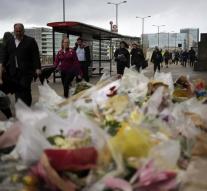 london - The British police took a body from the Thames on Wednesday morning. There was a search for 34-year-old Frenchman Xavier Thomas missing from London. It is not yet clear whether the missing man's body is.

According to VTM News, the body must still be identified.

Three terrorists killed seven people last Saturday evening. First they drove on hikers, after which they stopped in bars and restaurants around with knives around them. The act was claimed by IS on Sunday evening.

The police arrested two people who might have been involved in the attack.