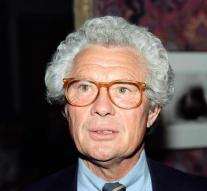 - British photographer David Hamilton in his hometown of Paris, deceased at the age of 83. It has a source Friday reported to the police. Hamilton was best known for his portraits of young women. They are often pictures of scantily clad girls in a romantic, dreamy style.

Hamilton was also a film director. Especially Bilitis (1977) with the American actress Patricia D'Arbanville and music by Francis Lai then drew full houses.