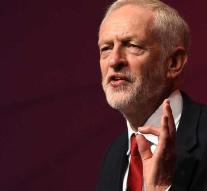 london - The British opposition leader Jeremy Corbyn will meet with EU negotiator Michel Barnier on the planned departure of the United Kingdom from the European Union on Thursday, British media reported.

Corbyn has just finished a party conference of his Labor Party. The party is divided over the brexit, but at the congress it has been established that a brexit without agreement with the EU is unacceptable. Corbyn calls that scenario a national disaster.

The left party wants elections as soon as possible, but according to Corbyn it supports 'a reasonable brexit' if the current Prime Minister May comes with it and the British keeps within the European market.

Corbyn hopes to contribute to breaking the impasse in the negotiations between Brussels and London. The current plans of Prime Minister Theresa May for the Brexit are not acceptable to the EU, as it turned out at a European summit a week ago. Corbyn also rejects these plans.