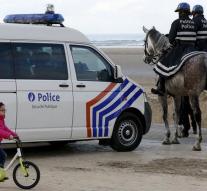 zeebrugge - A British couple has six people tried Sunday undocumented migrants in their home to get across the Channel. Sunday the two were caught red-handed when they wanted to embark in Zeebrugge to take the ferry to Hull, the prosecution said in Bruges Monday.

During an inspection revealed that in the caravan six people were hiding under the sofa and in other small spaces. The man born in 1963 and his sixteen years younger woman initially denied everything. Eventually, the man gave in front of the investigating judge to be responsible for smuggling. The torque is put in the cell.