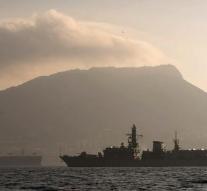 The Spanish ship Angeles Alvarino would not have responded to calls by radio. When the British naval vessel HMS Sabre flares fired, the research vessel turned around. According to authorities in the British territory Spaniards behaved recklessly.

The incident may get a sequel. The British Ministry of Defence announced that an official complaint is lodged with the Spanish government.