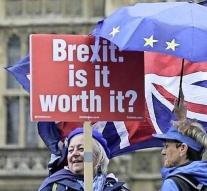 - A Brexit summit has failed again this week. The British Prime Minister Theresa May had a quarter of an hour to explain her requirements. She spoke so quickly that the other government leaders hardly understood her. 'It is still a mystery what the British want,' sighed one of those present against Bloomberg.

But also British companies and consumers have no idea where they will soon be. And that puts pressure on the economy.

Turbulence on the financial markets, a capital flight, even a recession: prior to the referendum, in June 2016, it was speculated that the choice for a Brexit would lead to economic calamity for the British.

But last year the British economy grew by 1.7% and unemployment has dropped to 4%, the lowest point since 1974. Although there is still no deal, there seems to be little wrong in the United Kingdom.

However, those who only look at the British results are missing the bigger picture. Compared with the rest of the euro zone, the figures are a lot less rosy. For example, the euro area grew 2.5% in 2017. 'For the Brexit referendum, the United Kingdom was one of the fastest growing developed economies. But now the country has collapsed into one of the weakest growers ', says economist Alexandra Dumitru of Rabobank.

Investment bank UBS figured that the Brexit, although not yet a fact, has already cost 2.1% of economic growth. The Swiss bank referred for this figure to a study by the University of Bonn. The researchers built data from different countries that were not affected by Brexit as a 'duper' of the UK economy. 'This model shows that not only the growth of GDP is lower. Investments are also 4% lower, inflation is 1.5% higher and consumption is 1.7% lower than without Brexit ', writes UBS.

According to Dumitru, the economy is mainly damaged by the uncertainty surrounding the British departure, which weighs heavily on confidence. 'Sentiment got a bite not only among consumers, but especially among companies. '

'The biggest impact can be seen in the investments,' says ABN Amro macro economist Bill Diviney. 'In the two years before the referendum, investments grew by 0.9% from quarter to quarter. After the referendum this decreased to 0.4%. And that while investments throughout Europe rose. '

In the first half of this year, British investments even fell, Dumitru saw. 'The British economy is at the height of the economic cycle. Unemployment is low, the labor market is tight and the economy is running at full capacity. Normally you see that investments increase, so that the capacity is increased. But companies do not know where they stand, so they do not dare to. '

Another effect is the sharp decline of the British pound after the referendum. It lost 16% against the euro in the space of three months and almost 20% against the dollar. As a result, inflation rose and purchasing power declined.

The cheap pound was good news for British exports, even though that effect was short-lived. Bill Diviney: 'Last year, exporters benefited from the low currency. But in the meantime the global trading climate has deteriorated, so that benefit is also lost. '

The cheaper currency also meant that fewer labor migrants came to the UK. Many of them send part of the earnings home, but because of the drop in the pound, that yielded less. Dumitru: 'Since the referendum, fewer and fewer EU citizens have been coming to the UK. In 2018, the number of foreigners working in the UK has fallen for the first time in many years '

Even though the Brexiteers will not immediately be sorry about this. Labor migration and restricting the free movement of people was a reason for many Britons to vote for the Brexit.

Meanwhile, time is beginning to dawn, an agreement has yet to be signed this year. Only then will there be enough time for all EU member states and the British parliament to vote on this. And only with an agreement does a transition period apply, to implement all new rules. No agreement means that after March 29 a hard Brexit is a fact. Dumitru: 'And then we still expect a recession. '