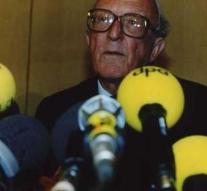 london - The British former minister of foreign affairs Lord Peter Carrington has passed away. British media report that. The Conservative Carrington was 99 years old and sat together in the 1950s in a cabinet with Winston Churchill.

He stepped up in 1982 after Argentina had invaded the Falkland Islands. From 1984 to 1988 he was Secretary General of NATO. He then succeeded Joseph Luns.