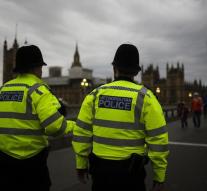 london - The British emergency services have saved sixteen alleged illegal immigrants at East Grinstead in England from a 'sophisticated' truck. According to British media, the migrants bore from the vehicle to other road users to indicate that they needed help.

Motorists saw the waving people in the truck and bore to the driver that he had to stop. The 63-year-old man put his vehicle on the side at a bus stop. Aid workers took thirteen men, two women and a child from the truck. It's probably about Iraqis.

A police spokesman spoke about a 'potentially life-threatening situation' because it was 25 degrees in the area. 'It was exceptionally hot in the vehicle and it was important to act quickly,' he said.

Two men had to be transferred to the hospital after their rescue with dehydration symptoms. The others received water and medical assistance. The driver of the truck has been arrested.