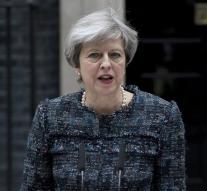 london - British political parties have suspended their campaigns for the House of Commons elections after the explosion in the Manchester Arena. Opposition leader Jeremy Corbyn of the Labor Party said this had agreed with Prime Minister Theresa May. May is in a hurry with her safety cabinet on Tuesday morning.

The leader of the Liberal Democrats, Tim Farron, declared a campaign in Gibraltar. The Scottish National Party (SNP) has postponed the presentation of its party program scheduled for Tuesday.

The Household elections are scheduled for June 8th.