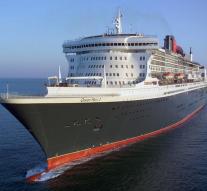 new york - A 74-year-old British Passagiere the cruise ship Queen Mary 2 is probably fallen on the Atlantic aboard and missing. Shipping company Cunard Cruises showed Saturday in British media that the search is stopped at the woman.

The woman disappeared early Friday morning, less than a day after the ship had left New York for a twelve-day cruise along the Caribbean. After alarm was beaten yanked the US Coast Guard include an airplane and a helicopter to search for the woman. The cruise ship turned around to help. the woman was not found.

The ship is now back on the old course for St. Maarten.