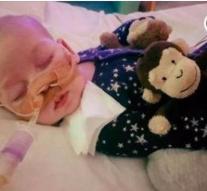 london/straatsburg - The terminally ill baby Charlie Gard need not be kept alive for an experimental treatment in the US. The European Court of Human Rights decided not to intervene in the British case on Tuesday as the parents asked, according to British media. This means that doctors can stop the medical support that the 10-month-old boy alive.

The treatment of Charlie was the use of legal battle between the parents and the British authorities. Doctors do not see treatment options and want to let the child die dignified. The parents think differently and want the baby to the United States.

Parents Chris Gard and Connie Yates earlier blamed British courts and therefore went to the European Court. Until the court ruled, the child had to be kept alive.

Charlie has been in a British hospital since October last year. He suffers from a rare genetic disorder and can not move, hear, cry and swallow.